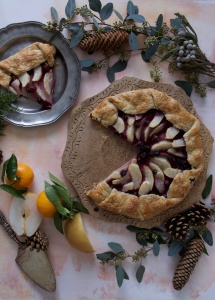 With in-laws living in Waterloo, Belgium we usually spend a couple weeks in the summer to visit so my husband Pierre can get his fix of Belgian cuisine whilst the in-laws enjoy their grandkids. Pierre has now been living in Toronto for 12 years and gets home-sick every now and then. Well, its mainly the food he misses. As do I. Once there, he easily eats the tomate aux crevettes grises (small, grey, flavour-packed shrimps prepared in a hollowed tomato), or Américain préparé (Belgian version of steak tartare) daily for lunch. Then of course there’s Belgian street food – frites with so many different sauces (Samurai and Américaine sauce are our faves), Mitraillette (a baguette with meat or sausage, topped with, grated carrots, lettuce and French fries smothered with Andalouse sauce) and my daughter’s favourite, Belgian waffles.

For those of you who haven’t been to Belgium, its one of those countries where the majority of the restaurants and street foods are consistently excellent. There are way more hits than misses. After personally experiencing the food and culture, its easy to understand why a Belgian expat would become home sick. I often find myself craving certain restaurants or dishes from Belgium. Not to mention even basic groceries such as their high fat butter and fresh eggs with sunset hued yolks. 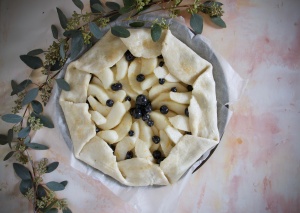 Over time, Pierre has adapted to the food here in Toronto with the exception of the bread and pastries (this is another blog for another time). Luckily for me, one type of food he has adapted to and just adores is Korean. The spicier the better. An anomaly considering Pierre never ate a Korean dish, nor did he ever try anything truly spicy until he met me. There are Asian restaurants in Belgium but they are few and far between. Vietnamese or Thai tend to be the more common Asian cuisines there. In fact, Korean restaurants are a rarity in Belgium. And for the handful that do exist, the slim menu selection and exorbitant prices stops one at the door. 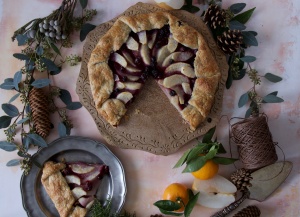 Pierre is Belgian by blood but was born and raised in Switzerland. I was born in South Korea to a Korean mother and Japanese-Korean father but immigrated as an infant to Canada. This distinct union of cultures has made for some extraordinary cuisine and unique traditions in our home. At times I’ll catch myself preparing a European dish with Korean spices or a Korean dish with European herbs. These dishes have been intentional, accidental or improvised based on what’s in the fridge or about to expire.

This flat pie recipe was a product of the latter. A couple of galette dough discs were nearing its three day fridge life. I had a couple Korean pears and a pack of blueberries almost on its way out. I was initially concerned the water-saturated Korean pear with its grainy flesh would ruin the galette crust. So I macerated it with ginger, maple syrup, Cointreau and freshly squeezed mandarin juice. The result was surprisingly good. It was just the right amount of sweet and tangy. 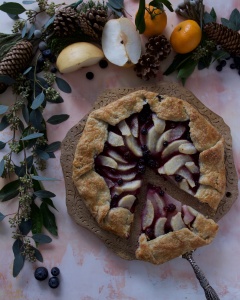 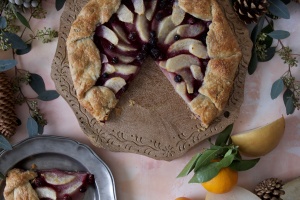 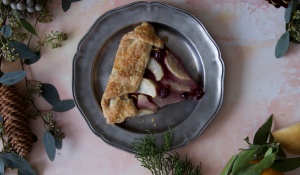 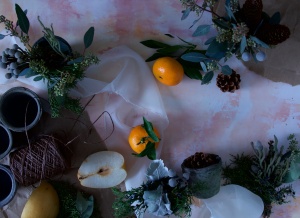 Earlier this month I had the pleasure of leading a

This croquembouche tower made with @MetroOntario I

Presenting my version of a holiday Sunakku grazing

“Although cheese was novel to me then [as a chil

Pretty much what my holiday table will look like t

Pictured above is an exquisite (mainly vegetarian)

Artisan cheese tower I made for @savourontario Ma

Red wine and chocolate. The perfect denouement to

So many beautiful and thoughtful entries for the c

So many beautiful entries already for the compleme

Hosting a Colour Challenge with @silvia_salvialimo

My heart was melting snapping these for Grandparen

Just me, my little prince bust and 12 pieces of Ch

It’s been over 6 months since covid gripped the

Had the absolute pleasure of being interviewed by

I think you’ve all noticed that my fave olive oi